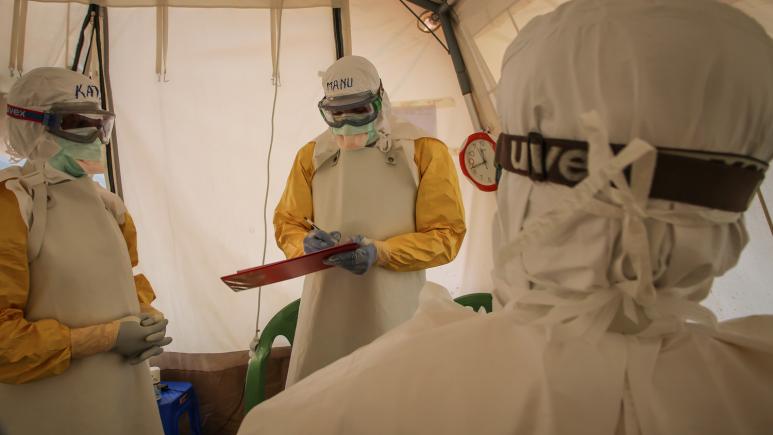 On August 1, 2018, the DRC Ministry of Public Health declared an Ebola epidemic in North Kivu, a province that has been plagued by conflicts between armed groups and chronic insecurity for more than 20 years. Constant population movements in the region have fostered the spread the epidemic to the provinces of Ituri and South Kivu, and internationally to Uganda, prompting the World Health Organization to declare the epidemic a "Public Health Emergency of International Concern". Armed conflicts and people's mistrust of response teams have required Médecins Sans Frontières and Epicentre teams to constantly adapt to this new outbreak, including the first large-scale use of new vaccines and experimental treatments.

Epicentre's activity entails providing technical support to MSF teams in the field but also to all the actors involved in the fight against Ebola, and collaborating with several commissions of the National Coordination of the Riposte. Epicentre manages and compiles data from isolation, transit and treatment centers through the set-up of a standardized line list and the creation and management of an online dashboard. Weekly situation reports and specific analyses are produced, as well as case narratives, which are crucial for identifying and monitoring transmission chains.

Epicentre is an active member of the “Analysis cell”, which is comprised of the Epidemiological Surveillance Division/Ministry of Public Health, the World Health Organization, the US Centers for Disease Control and Prevention, UNICEF and the Red Cross, which objectives are 1) to strengthen surveillance and information management, 2) to monitor the evolution of the epidemic and the effectiveness of the response 3) to conduct quantitative and qualitative operational research when appropriate, 4) to formulate recommendations to guide decisions, which are then implemented by the monitoring and action unit.

Demographic analyses of this epidemic shows an unusual number of infected children under 5 years of age, who are over-represented, especially among community deaths. Overall, the disease affects a majority of adults between the ages of 20 and 35. Women are more affected than men. On October 20, 2019, there had been a total of 3243 cases (3127 confirmed and 116 probable) and 2133 deceased cases (66%). As of early October, treatment and transit centers had as a whole admitted more than 28,000 patients, among whom only 7% had been confirmed. The average time between symptoms’ onset and admission to a treatment center was estimated to be 5 days. Among confirmed and probable cases, it was estimated that 50% were on the contact list at the time of their detection, that is, they were already listed as individuals who had had a contact with a confirmed or probable case already notified. Twenty-eight percent were on the contact list and were followed during the 21-day incubation period because of the risk of developing Ebola. Among confirmed and probable cases admitted to treatment centers, 64% were reported as having had a contact with a confirmed case, and 25% were vaccinated.
Overall, approximately 33% of confirmed and probable cases died in the community and 5% of confirmed or probable cases were among health personnel.

These indicators show that there remain many challenges to the response. There is a need to improve contact identification and follow-up, vaccination coverage, community surveillance and infection prevention and control measures at the health facility level. Better community involvement in the response is essential.

Case mapping has allowed for the identification, and may possibly predict the most at risk health zones, among which high transmission health areas/cells, and priority health facilities. Risk factor modeling will help the prioritization of intervention areas based on security context, vaccination, time spent by the patient before isolation, cases known as contacts, ease of access to a treatment center, and distance between main epidemic hotbeds.
Epicentre is also working on the predictors of infection, specifically, it is developing a decision tree to simplify the triage of suspicious cases.

The rVSV-ZEBOV-GP vaccine and the "ring" strategy

Vaccination with the rVSV-ZEBOV-GP vaccine has reached more than 250,000 people. The chosen strategy known as the "ring" strategy consists of vaccinating a patient's contacts and the contacts of his or her contacts as well as front-line workers. The analysis of this vaccination activity has shown that lethality was 27% among vaccinated patients (vs. 58% among non-vaccinated patients). It appears that the "ring" strategy in this epidemic hasn’t achieved a high enough vaccination coverage, which could stop transmission.

Implementation of another vaccine

Moreover, Epicentre will participate in the implementation of the clinical trial of another vaccine manufactured by Johnson and Johnson, of Professor Muyembe of the National Institute of Biomedical Research of the DRC is the principal investigator.

A multicenter, multi-outbreak, randomized, controlled safety and efficacy study of investigational therapeutics for the treatment of patients with Ebola virus disease -Soumana I – Video 2019 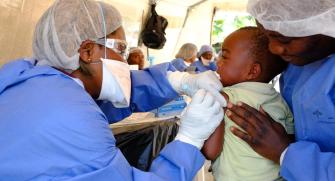 Ministry of Health in DRC approves Janssen Ebola vaccine for use

The current Ebola outbreak in North Kivu and Ituri provinces of the DRC has been raging since 1 August 2018, with over 3000 confir... 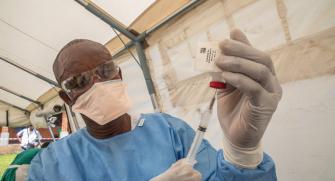 Due to the current outbreak going on in the neighbor country, the Democratic Republic of Congo, Uganda is among the countries whic...